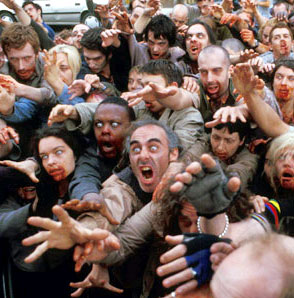 I love predictions, no matter how many times people are proved wrong by the slow spicy brain shuffling of time; people, commentators and pundits have to predict. Its like a disease. The side-effects of which are the spewing of guessing, speculation and prophecy.

At the moment there is a lot about how Google/Blogging/Social Software/Wireless is going to take over the world.

Like a hell-bent zombie banging up against a window to get to those tasty brains, prediction attempts to taste the sweet gooey softness of the future. We may live in the now, but damn the futures exciting, dangerous, doomed, totalitarian yada, yada? Hmmm brains.

Indeed much prediction is probably based on what happens in the past, the ‘History repeating itself’ idea. But like a loaded shotgun forced into the disintegrating grey face of time, it can get messy. In the book ‘What is History’ E.H. Carr proclaimed that ‘History’ ‘is an unending dialogue between the present and the past’. The contents of the dialogue may change, and the focus but the dialogue continues. History is not static, attitudes change towards events, history is written by the winners etc.

The concept of linear progression is often at fault. People assume that things will carry on as they are. The .com boom of the late nineties. Tulip mania of the 17th Century. Stock Markets. House Prices. All based around predictions that the markets would continue to grow and never revert. When people smell those tasty brains (or stock options), nothing is going to stop them. The ravaged undead mob keep shuffling on, regardless of what happens.

In my opinion prediction is somewhat like gambling. You try and back a ‘winner’, if it comes through you get the buzz of being right and most likely the monetary return (alas, no tasty brains). Prediction is very necessary in a capitalist system, most of our economies are based around this. Maybe there is no alternative, but it just seems to me that there are an awful lot of people that back losers.

“I think there is a world market for maybe five computers.” — Thomas Watson, chairman of IBM, 1943.
“It will be years — not in my time — before a woman will become Prime Minister.” — Margaret Thatcher, 1974.
“It doesn’t matter what he does, he will never amount to anything.” –Albert Einstein’s teacher to Einstein’s father, 1895
“We don’t like their sound, and guitar music is on the way out.” -Decca Recording Co. rejecting the Beatles, 1962.
“Drill for oil? You mean drill into the ground to try and find oil? You’re crazy.” –Drillers who Edwin L. Drake tried to enlist in 1859.
“Stocks have reached what looks like a permanently high plateau.” -Irving Fisher, Professor of Economics, Yale University, 1929.

Sources:
The Philosophical Science Of Prediction And History by Ion Saliu
What is History Now Edited by David Cannadine
Shaun of the Dead
Scaryduck.