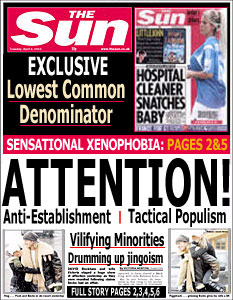 I must say I am becoming increasingly annoyed at the tabloids of late. Maybe the Beckham story is true, maybe it’s not – I don’t really care.

I am not against newspapers writing their opinions, it’s their right, as it is mine to write this. However stories should be angled as that, opinions, not the 100% true fact that they are often presented as. One headline over the past week in The Sun was ‘Hate Britain’ a seemingly thinly veiled attack on Islam based around one instance in Hyde Park. Apparently it is okay to display stories as proven fact if they come from a singular source, regardless of the fact that in many cases the source is represented by Max Clifford and being paid 6 figure sums. However if the government puts out a document based around one source people (and the tabloids) go mad.

Indeed on this Blog, people have the right to agree or disagree with my comments. I welcome this approach. My facts can be cross-referenced and checked and people can post their reaction or debasement of these ramblings in a Blog of equal stature to this. We do not have that ability with newspapers. They are a monopoly of opinion, and I feel that’s wrong.

‘Marxists view capitalist society as being one of class domination; the media are seen as part of an ideological arena in which various class views are fought out, although within the context of the dominance of certain classes; ultimate control is increasingly concentrated in monopoly capital; media professionals, while enjoying the illusion of autonomy, are socialized into and internalise the norms of the dominant culture. The media, taken as a whole, relay interpretive frameworks consonant with the interest of the dominant classes, and media audiences, while sometimes negotiating and contesting these frameworks, lack ready access to alternative meaning systems that would enable them to reject the definitions offered by the media in favour of oppositional definitions.’

‘The Sun understands its readers. It may have no great desire to educate them or liberate them but it knows unerringly where the lowest common denominator is and focuses there.’

The ex-editor, Kevin MacKenzie, apparently once described an archetypal Sun reader as the â€˜skinhead with a six packâ€™. MacKenzie had no desire to change this â€“ he simply wanted to use it.

People may primarily read the newspapers that reflect their views but they are also changed by them, precisely because the material comes to them from a trusted source, but why is it trusted?

‘According to the Marxist view, the media are influential in the ‘construction of reality’ for the rest of us. In other words, we understand from the media what the world is like. The media represent the major means by which individuals, groups and classes construct an understanding of the lives, meanings, practices and values of other individuals, groups and classes, thus acquiring a picture of how ‘social reality’ hangs together. Reality is not in any sense ‘given’, it is constructed; media texts do not reflect reality, they are a construction of reality.’

Britain today is a coarser, less politically astute country than it was thirty years ago, and the Murdoch press and the TV stations he controls and the media tone and priorities he sets have contributed to that. A poll of the 100 most influencial people in Britain listed Conrad Black and Ruppert Murdoch in the top 10, the Queen (Head of State) came in at 100.

The critics I am sure will simply say – ‘well don’t read it’ or the classic ‘people deserve to know’. However ‘headl
ines reach an audience considerably wider than those who read the articles, impact is deliberately sought through the use of the choice of emotive vocabulary and other rhetorical devices’. Even further the actual stories themselves can be seemingly tame and careful. Yet ‘headlines encapsulate not only the content but the orientation, the perspective that the readers should bring to their understanding of the article’ and ‘structure a particular view of the world by imposing on information a hierarchy of importance’. And there seems to be very little comeback if that story is incorrect (unless you are the BBC).

Essentially I feel that many of our opinions are being moulded by an almost totalitarian onslaught from the media, commercial and (less so) governmental organisations.

Is it any wonder that apathy rues the roost? The future’s not bright the future’s didactic