Dave the Chameleon, absolutely brilliant stuff from the people that brought us such classics as the war in Iraq and Third World debt cancellation. A very cute mini-film ala Pixar about David Cameron and the very much hyped belief that he changes his opinion depending on whom he is addressing (isn’t that the very definition of a politician?). I really like this, among the style of recent ads where political parties realised that no one likes nasty, this ad manages to be appealing and negative (and seems to be and idea the Tories had themselves). 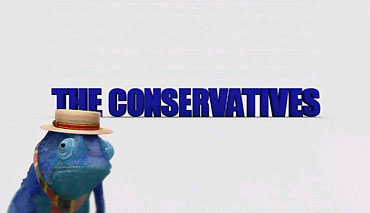 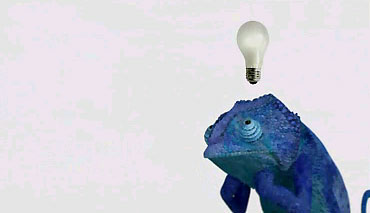 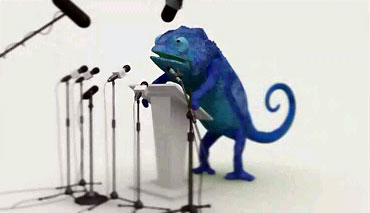 I see the point made by Mark Lawson that people may think this a little too cute and think higher of Dave than is intended:

In short, Dave is the kind of character that viewers may well love. An office straw poll suggests that the message – you can’t trust the Tories – is undermined by the essential charm of mini-Dave, and the reliance on an overly complex idea. Yes, his namesake is transforming the party, but it’s only superficial. The danger is that the first part of that proposition is more striking than the second. The advert even highlights one of Cameron’s assets – his green credentials, reinforced by his willingness to cycle to work.

However, a point made later in the article, and a viewpoint I share, is that political advertising rarely makes much of a difference anyway.

“There is a myth about political advertising,” warned Philip Gould, New Labour’s polling and marketing guru, in his book The Unfinished Revolution. “Advertising has an effect but it is small and rarely decisive. It is certain that in four of the last five elections, advertising did not materially influence the result.

So if advertising doesn’t really matter then one might as well make it fun eh? In much the same way that large corporates don’t really advertise to increase sales, more remind people of their status and power. I for one think this trend should continue. Gordon Brown and John Prescott anyone?