‘Springwatch is the biggest ever survey into the arrival of spring across the UK. It’s run by the BBC in association with the Woodland Trust and the UK Phenology Network.’

‘We would like you to watch out for and record your first sightings of any of the six species below.’

and wouldn’t you know it I saw a seven-spoted ladybird on the 17th. Admittedly it was in my flat, but my window was open for a good hour before sighting (he protests wildly).

Ofcourse in true ‘ufo sighting’ stylee, I managed to only take a rather crap, out of focus photo. All I had to hand was my trusty camera phone.

Note this is nightime and I am trying to take a photo of a bug.

Still, there it was proudly displaying all seven spots. See it yourself in its full grainy, red blobiness:

and get this – ‘Spot them from February-March’, do-da-do-da-do-da-do-da (blog mood music). Global warming/FBI conspiracy/Ladybird hibernating in my flat over winter – who knows….. 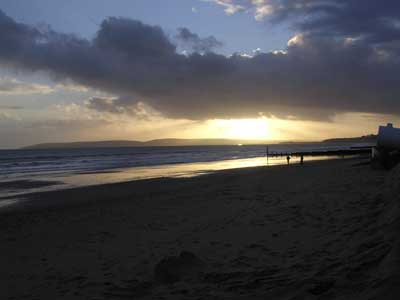 Lovely example of bad interaction design – I was walking past some flats yesterday and happened across the below.

Brought some wonderful images to mind of children parking cars and the emergency services having to pay and display round the corner to attend an incident.

It may obvious what the message is meant to be although is this more to do with the fact we are used to poorly laid out public messaging or simply that within the context our brains are able to think a little more laterally.

Note: I believe the design of the original UK road signs to be excellent. But as with many systems, increasing complexity does not necessarily increase understanding. 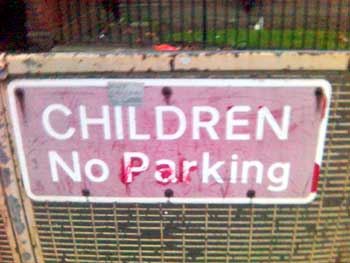 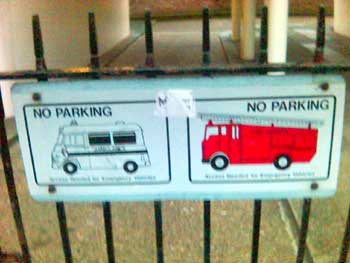 * Create an initial population of randomly-generated individuals
* Evaluate each member’s fitness (“fitness” depends entirely on the task in hand; a member’s fitness might be how many 1s its genes contain, or how well it plays chess using its genes as “weights” for various evaluation parameters)
* Kill the bottom x% (least fit) of the population (often 50%)
* Let the fittest members breed (“reproduction”):
Choose two members for breeding (“selection”) – lots of variations here: e.g. either select two at random (“uniform”), or weight the selection according to a member’s fitness (“fitness-proportionate”)
* Breed them (“crossover” – more options here: e.g., a child can be formed by single-point crossover (the parents’ genes are swapped over at some random point along their chromosome), two-point crossover (the parents’ genes are swapped over at two random points), uniform crossover (the parents’ genes are selected bit-by-bit randomly), and weighted crossover (the parents’ genes are selected bit-by-bit randomly but weighted according to each parents’ fitness)
* Apply mutation – each gene of the child is subject to a small chance of mutating to a different allele (an allele is a possible value for a gene, in binary, the alleles are “0” and “1”) – a common mutation rate is 0.001
* The children form the new population of members
* Go to step 2 until you’ve evolved a suitably fit member or population

When will they learn eh? Some science geezer reckons we should adopt a 364 day calendar so that all dates land on the same day each year. This so called “Calendar-and-Time” (C&T) plan means that calendars will not have to be reprinted each year.

As usual with scientific study, all logical and good so far. However as he has discovered, people are none to happy about the prospect that their birthday will now be consigned to one day of the week for the rest of their life, I mean imagine celebrating your birthday on a Monday for the rest of your life….arghhh! It would be like Groundhog day (kinda, sort of….well nearly). He kindly adds “You have my permission to celebrate your birthday the preceding or following Saturday” oh, well thankyou Lord of the Days.

And under this new proposal certain days will be shunted off the calendar for ever….such as 31st Jan….gone…forever….look what happened on 31st Jan:

1606 – Gunpowder Plot: Guy Fawkes is executed for his plotting against Parliament and James I of England.
1961 – Ham the Chimp travels into outer space.
1990 – The first McDonald’s opens in Moscow, Russia.
1981 – Justin Timberlake, musician born

also Feast day of St. John Bosco. (the Catholics may be none too happy about losing a feast.)

and what does the supreme ruler of dates decree about celebrations that fall on this date: “Henry suggests they celebrate on either 30 January or “consider themselves to be born on the fourth of July”…turd

I mean what a tit. Sure it makes sense, sure it makes things easier. But why can scientists never quite grasp the concept that we like change, we like turbulence, in many ways its what defines us.

‘Henry hopes to have rallied enough support for his plan to start it on 1 January 2006’ – I say we all pretend to go along with it and when he starts to smugly follow his calendar, we all secretly switch to the normal, correct one and totally knacker all his appointments. Maybe a bit far to go for a prank but hey, how else is he going to learn eh?

Disasters Emergency Comittee (DEC) – comprises a raft of aid agencies, including the below and others
British Red Cross
Save the Children UK