Okay, The Sun calls for heads to roll at the Beeb for faking the Queen’s exit from a photo shoot, but when they print fake pictures of a Great White shark in Cornwall it’s okay? Have I got that right?

So when is it okay to lie? Seems to be it’s not okay when you believe it to be true (like the BBC), but okay if you’re the Sun. But they’re just cheeky chappies aren’t they?

Is the fakery issue just one of those cyclic issues in media, just as early photography came under fire for early fakes. Seems to stem from our need to to trust new technology and forget that there are people behind the scenes, people who are not necessarily trustworthy.

Reading the news about the letter bombs sent to various motoring agencies this morning, I noticed a lack of the T word, terrorism in many of the reports. Sounds like a cast iron case (in my opinion) for the use of such a word.

Now I don’t want to make unfounded suggestions but if letter-bombs were sent, say from an Islamic source, to say a governmental department (of which capita and the dvla are not far from being) the newspapers would be swimming with headlines such as terror threat, campaign of terror etc etc. Now I am not trying to make any sort of judgement, simply pointing out the perceptual difference that would occur if the targets were slightly different. People are still being injured, maybe the bombs are not intended to harm, but then again even the act of attempting to send such devises constitutes terrorism so that doesn’t really count.

But I guess seeing as it’s seemingly a (white urban male) nutter with a grudge against driving laws then I guess it doesn’t qualify. Which begs the question, what exactly is terrorism? But even weirder is the complete lack of any suggestion this is terrorism, so what is it about the story that made this simply a crime and not an act of terrorism? The perpetrator (whom we know nothing about), the targets (as mentioned effectively governmental departments) or the size of the explosives?

My god, could channel 4 handle this any worse? Maybe if they invited the BNP onto BBLB to discuss their policies? I am pretty sure when Orwell wrote 1984 he assumed that those in charge in his dystopian future would actually know what they were doing, indeed most dystopian futures seem to assume that the government/dictators/ruling classes are always one step ahead of the proles. Well if there is one thing Channel 4 prove, it’s that there is little chance of this coming true as most people in extreme power appear to be blinded it and tend to make rather silly judgments. I mean how else can you explain the the massive cock-up by channel 4 last night when they declared ‘to save Shilpa text xxxxx’ rather than the correct version ‘to evict Shilpa text xxxxx’. Worse PR evar.

Not to be outdone, Kevin Lygo, director of programmes at Channel 4 declared today that:

“This was in danger of being the most boring BB that we’d had in many years, maybe ever…..

……Lygo admitted wondering “what can we do?” before the race row “erupted into this extraordinary story”.

Wow, nothing like a bit of racism to spice things up eh? I dred top think how they are going to top that.

(apart from a teensy reference the other day)

Ah those canny investigators at the Health and Safety Executive and the Environment Agency have finally put all of our collective minds at rest with a statement about what happened at Buncefield (the fuel depot that created the cloud of death over most of the south-east).

Evidence points to a mixture of petrol and air which ignited being the cause of the Buncefield oil depot explosions, the lead investigator has said.

Ah of course, there was me thinking is was caused by cheese.

….And not to be trumped

There appear to have been several explosions but the exact sequence of events has not yet been established.

Damn, these guys are good, so that’s what caused the huge flames and large quantities of smoke, an exp…los..ion, I see,

When are we to see Health and Safety Executive and the Environment Agency Investigates (HSEEA Investigates) on our screens?

Although to be fair, it does go on to say that its early days and they need to find out more. Still kind of funny though.

I have been working in the Kings Cross area for some time now (and no, I am not a lady of the night). I have seen the area change quite considerably since working here, many a time was I welcomed to my building by somebody injecting brown muck into their arms or offering certain ‘services’ on my short walk from the tube station to the sanctity of our building.

With the development of the new European terminal at Kings Cross station, the area is gradually being converted from a crumbling Victorian mess into a kinda cool, glass and brick warehouse place.

For some time it has been rumoured that the guardian are to move into the area from thier current location in Farringdon. I have just found out that they are infact moving next door to where I work into a rather new swanky building (where previously sat a 60s modernist cube of brick containing a various storage facilities with a faux Olde Worlde Pub attached to the side).

Image below to illustrate: 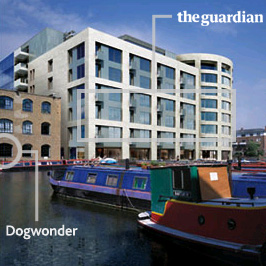 My brain is having difficulty dealing with the ironies. Has a solar flare gone off or something?